Things That Won’t Happen in 2017: And What it Means

Category under: 2020 and Beyond, Blog, Tesla, Trends
DAILY
MOTIVATIONAL
INSIGHT
FROM
JIM

Kevin Kelly, the founding editor of Wired, coined a very popular phrase : “The future happens very slowly and then all at once.”

I’ve seen the concept used quite a bit as of late as people come to comprehend that things are changing faster than they thought they would. In my parlance, I’ve been phrasing this idea as such: “the future is happening faster than we think.’

Yet as we head into 2017, I’m seeing the typical breathless end-of-year observations as people pull together their lists of things that will happen soon. One would think that one day in 2017, we are going to suddenly wake up into a world that we will barely recognize. Yes, the future happens slowly, and then all at once, but ‘at once’ usually means a span of time of several years, not a matter of months.

What will happen? One things seems certain! 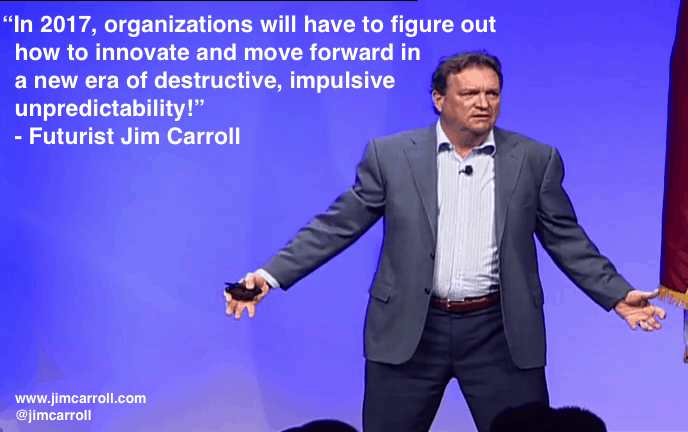 Many of these predictions are bang-on: but it’s their timing is off!. With that thought in mind, I thought it would be useful to mention some of these trends of things that won’t happen in 2017:

End of year lists are useful, as they help to spur creative thinking in people, and help them to align their actions to obvious future trends. The challenge is that sometimes, exuberance for the trend gets in the way of the practicality of the timing.

Having said that, I expect 2017 to be a banner year in terms of the speed of change of several major trends. I think we will see very fast acceleration with a variety of significant technologies and ideas – in my case, I’m carefully watching the cost collapse with 3D printing, computational analytics, energy sharing and storage, genomic interpretation and data sets, advanced material development, design methodologies and the impact of crowd-thinking, machine learning, the acceleration of science and chemistry, and the rapid emergence of smart highway infrastructure.