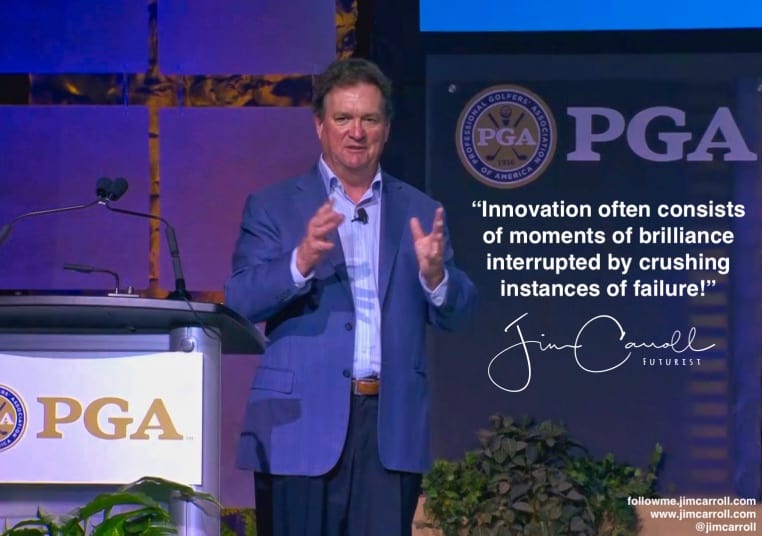 And I had a great round, playing to my handicap. In fact, parts of my game were the strongest I have seen in a while. On the other hand….. there were a few less than stellar moments. ….. So … think about golf and innovation.
This particular quote actually came to my mind when my personal trainer mentioned the phrase ‘moments of brilliance’ when referring to my ability to follow instructions, followed by my ability to drift away in thought.
Then, it floated back into my mind during my round later that day. It defines golf for the typical amateur! The voyage into golf is a wonderful metaphor for the concept of innovation on so many different levels. Failure, risk, reward, experimentation, curiosity and so much more. Yet even successful innovators have seen crushing failure along the way. This particular photo is from my keynote for the PGA of America – the 2nd time they had me to headline an event. Lee Trevino was on stage just before me, and I was followed later by Bubba Watson. You can’t tell me that both of these world champions have not been through the same process of innovation with their game as found within the quote!
What will you do today to develop an overall goal of innovation, knowing that the path there will involve a lot of up and downs? In my case, I’m grabbing a set of headphones later and will go and spend 2 hours at the short game area!