Daily Inspiration: “The future? It’s those things you create, not the things that you hope for!”

“The future? It’s those things you create, not the things that you hope for!” – Futurist Jim Carroll 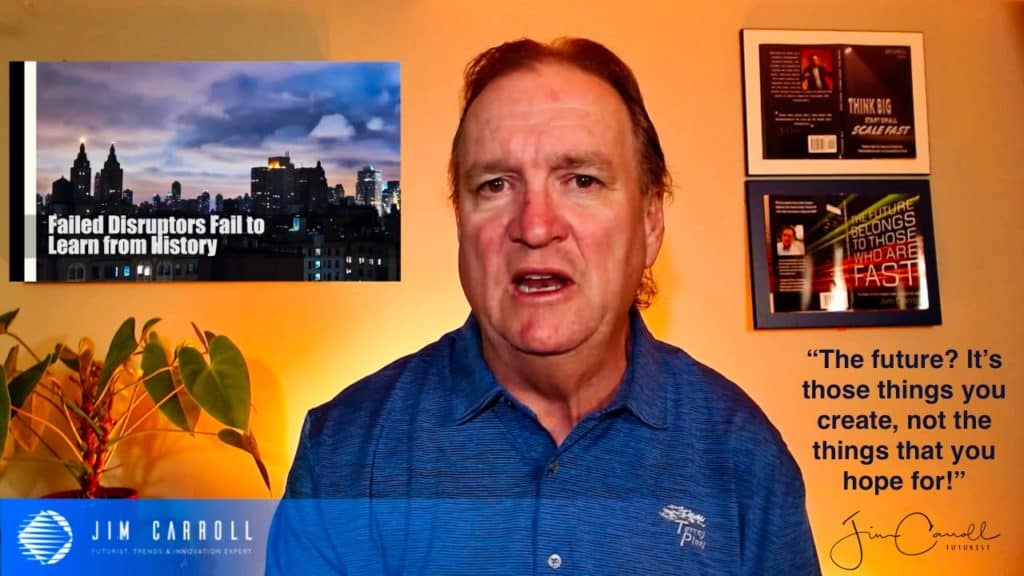 Check the screen – I’m in the home studio, about to play a video from a leadership series I ran in January. “Failed disruptors fail to learn from history.”

History has taught us that those who don’t invent a new future when a new future is upon us, are the ones that don’t survive.

I’m not ready to retire – my old world plan had that happen in 5 or 10 years. I’d love to have my old life back – a keynote in Morocco for the World Bank, a leadership meeting for Pfizer in Paris, a talk for 5,000 in Las Vegas for an adrenaline rush. I miss all that – but it’s not coming back.

And so, you know my mindset is to move it along, and build a new future. Is that your mindset?

I’m not waiting around for the global meetings and events industry to figure out that in-person conferences and leadership meetings are dead for a significant period of time – but I’m now ready and waiting for them when they realize their path forward is exactly the type of virtual content-delivery machine that I’ve constructed in my home. Studio 1 and Studio 2.

And just wait until I establish my new outdoor studio – “Studio 3 : Nature’s Stage!”  (I just wrote that to freak out my wife to see if she reads the entirety of these posts, but hey, that now has me thinking!)

I digress. People tend not to learn from history, because they become blinded by the success that they’ve had in the past, not the success they need to create for the future. It’s all too easy to ‘repeat the formula’ and milk it for all you’ve got – all the while realizing that the future has a different completely different mix to it.

Over the last few days, I’ve been revising a video leadership series I put out in January this year – like, in the olden days, back when we lived in a different world! It was great content, based on the observations I’ve made along the way through 25 years of advising a massive number of companies and industries. Then, it disappeared and sank like a stone – attention spans were diverted for some reason or other. Maybe a global economic meltdown. (I had a new book come out too! Who would have known!)

But I’m now revisting and rerunning this video series, each day, from my new Studio 2 in my home broadcast studio. I came to realize that my future lay not just in my green screen studio – suitable for the big stage productions! – but a smaller, more intimate studio, suitable for short snippets of insight, interviews and more – was definitely required.

I’m busy recreating my future at a furious pace, knowing that this is the future I will have. Not necessarily the future I wanted, but nonetheless, the one that I’ll have! I’ll run with what I’ve got, and work hard to make it better, spectacular, fun, engaging, relevant – and profitable!