Daily Inspiration: “Your choice: the future that is in front of you, or the better, different one you choose to create!”

“Your choice: the future that is in front of you, or the better, different one you choose to create!” – Futurist Jim Carroll 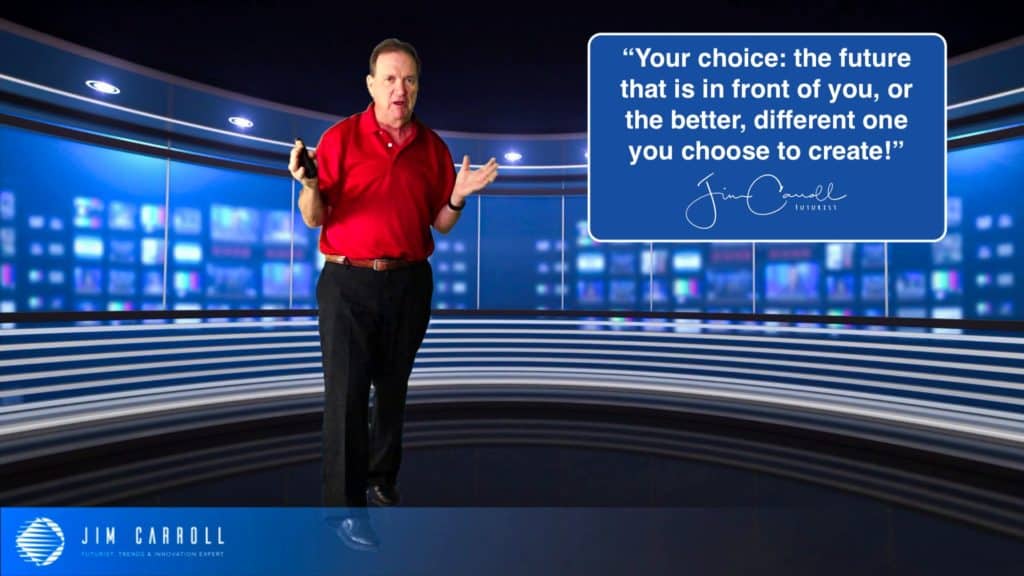 Astute observers will note that I’ve got shoes on. A number of my work shoes have silently appeared in the studio with a shoe horn. I think it’s a message. I’ve taken a pair of sandals down for a few future shoots in a step of silent rebellion.

Let’s get to the point – there is a *massive* amount of economic devastation and career destruction occurring out there. Beyond the pandemonium of a failed societal response to the Covid-19 crisis, there are entire families where the future has been torn apart as jobs and careers have disappeared.

I see it every day within the industry in which I have worked for over 25 years. I will, on occasion, reach out to one of my speaker bureau partners – there are many – with an update on what I’ve been up to. Inevitably, one will write me back and let me know about the 70% or 80% of staff who have moved beyond ‘furlough’ into full time layoff. Beyond these groups, there are meeting planners and event professionals who have seen their businesses destroyed; entire teams of AV production managers and techs who no longer have a stage show to support; convention centre staff who face a future of locked doors; the pain of the list goes on and on.

My own circumstances are but a small speck in a massive wave of unprecedented future-path destruction.

But here and there, I see many signs of hope, people determined to try to carve out a new and different future. One of my favourite posts came from an Orlando AV company which dragged all of its equipment into a hotel meeting room, set up a stage, put up the lights, set the cameras – to film a speaker who did his thing on a small little stage to an empty room but a potentially big virtual audience.

Desperation is the mother of all innovation!

Will this particular approach work? Will mine? Are there other business models that we don’t yet see? Might there never again be any sort of demand for thought-leader insight to the level that we provided in the past? Who knows – but what I do know is that moving forward is better than standing still; learning is better than freezing; experimenting is better than stagnating.

For everyone in pain; in tragic career circumstances; facing a future that was not planned but is now a harsh reality, your life preserver is to be found in your actions. You face a certain kind of future – unless you choose to create a different future. The latter path is often a better option!