.
Home   >   Covid-19 & Moving Forward   >   Daily Inspiration: “Those who don’t like a trend don’t just oppose the trend, they now deny the reality of the trend itself”

Daily Inspiration: “Those who don’t like a trend don’t just oppose the trend, they now deny the reality of the trend itself”

“Those who don’t like a trend don’t just oppose the trend, they now deny the reality of the trend itself” – Futurist Jim Carroll 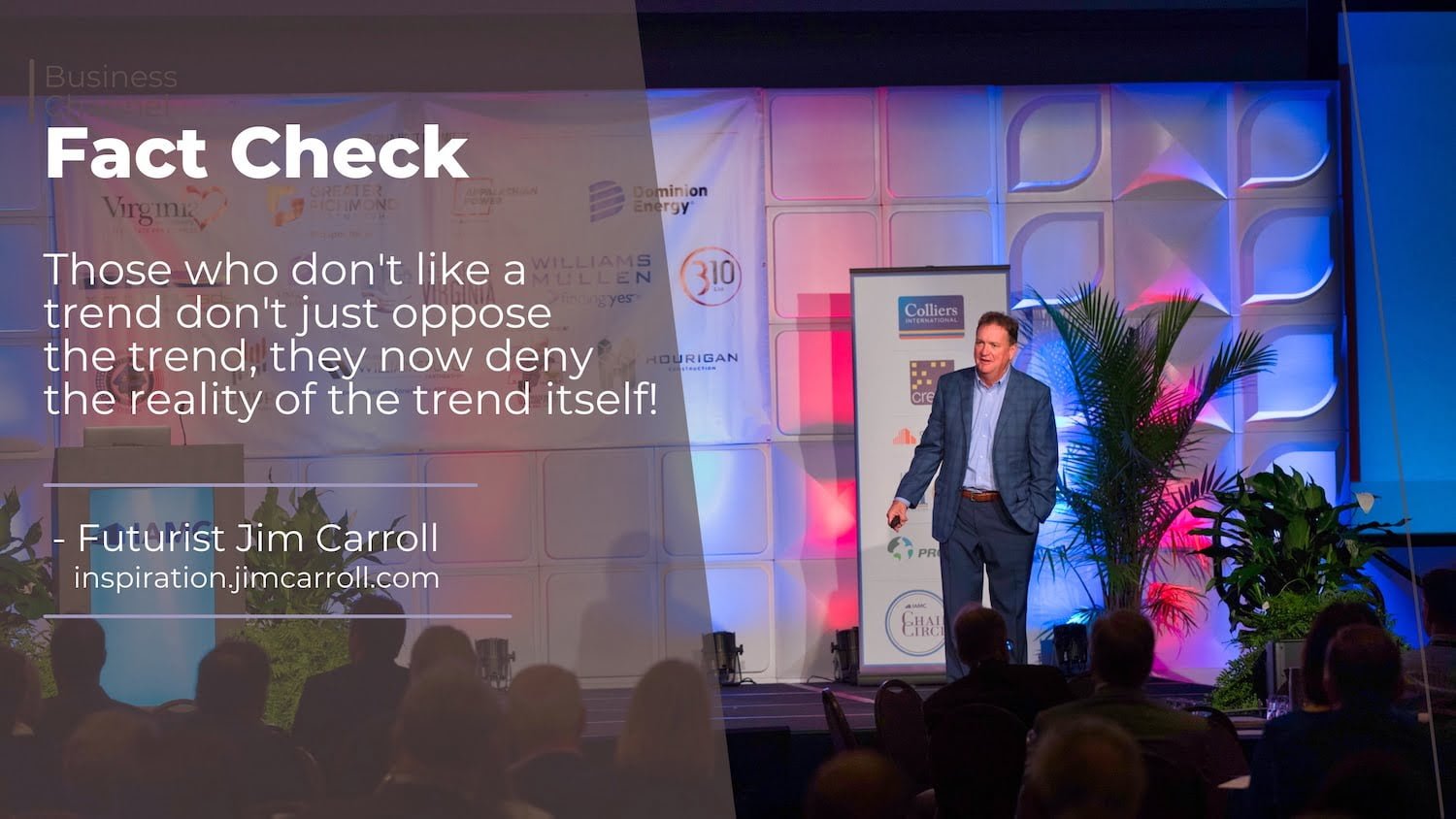 I’ve done a LOT of economic development-oriented keynotes over the years – for government agencies, regional associations, economic development organizations,s, and companies, on the trends that will define the next wave of opportunity. These talks usually revolve around such issues as advanced manufacturing, workforce skills issues, disruptive business models, the acceleration of technology, and similar issues – all trends that are resulting in new jobs, new companies, and new opportunities.

This has included events such as the Nevada Economic Development Association; business relocation groups such as CoreNet, the Industrial Asset Management Council (who represent the Fortune 1000 companies making major factory investment decisions), and many others. All of these talks have examined what it takes to accelerate a region into the future – aligning to trends, building an environment and infrastructure supportive of economic growth, and more. The particular photo used in today’s quote is from the IAMC event in Richmond, Virginia – the third time in two decades they’ve asked me to open their event.

But things have changed. There is no doubt that in the last few years, many regions have been doing everything they can to turn themselves away from opportunity, putting in place barriers, rolling back the future, or denying the reality of trends. I’m always fascinated – and shocked at the stupidity really – when I see politicians attacking wind energy ‘because the lights might go out,’ and who fail to understand the role of battery technology in the next-generation grid. This type of sheer stupidity will do nothing to attract new energy jobs to such a region – leading companies in this new era in which oil and carbon are over will choose other regions in which to make their investment.

Political populism does not create jobs – it destroys them. And with that in mind, here’s the second version of today’s quote: “Those who attack the future, try to roll back the future, or stack the odds against the future, will be taken aback by the lack of opportunity in the future!” 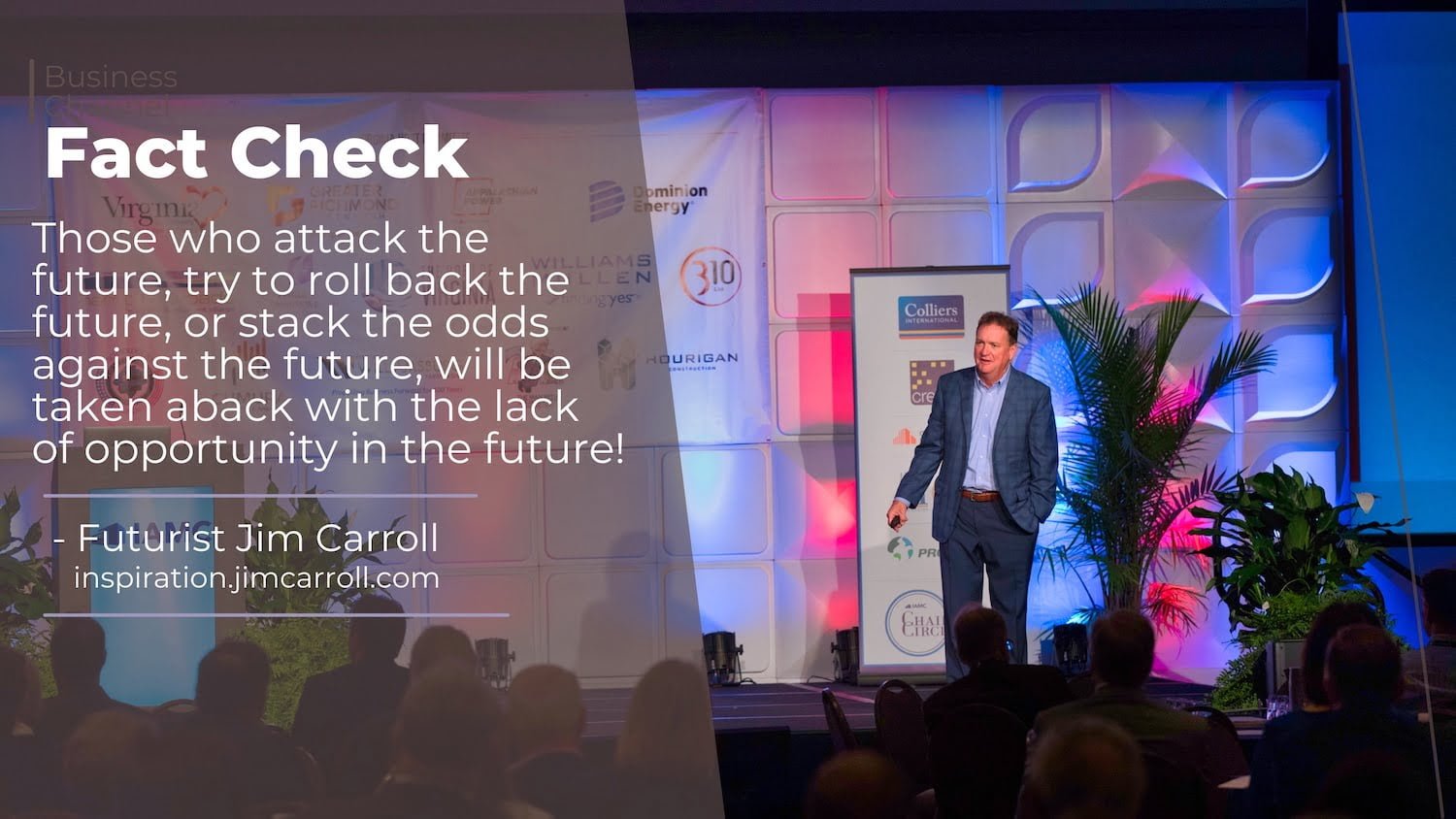 I try to avoid politics in these posts, but we are seeing this trend everywhere – attacks on teachers, education materials, and classrooms, with plans for veterans to take on the role of educators; the reversal of long-standing constitutional rights with an attack on reproductive health and marriage; dismissal of the science and opportunity of wind energy and other forms of renewable technology in the face of a deepening energy crisis; the denial of the acceleration of climate damage.

Here’s the thing – an anti-future agenda can only go so far before the companies and groups who make economic development decisions are going to choose to invest elsewhere. I’ll just leave this observation here:

As a global company headquartered in Indianapolis for more than 145 years, we work hard to retain and attract thousands of people who are important drivers of our state’s economy. Given this new law, we will be forced to plan for more employment growth outside our home state,” the company said in a statement obtained by Fox News Digital on Sunday. Fox News, August 2022

I’ve tried to describe this on stage by explaining it in the context of the time the Jetsons met the Flinstones. This is our world right now. 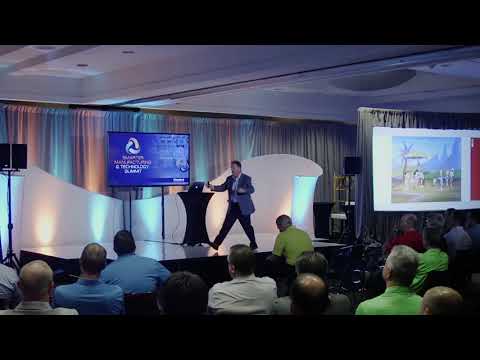 Of course, one time, I was really wound up on stage. Fair warning – if you are a big fan of a guy who likes to abscond with nuclear secrets, you probably don’t want to watch this clip. But I would also suspect that you are probably not a fan of mine in any event, since those are the folks who really don’t seem to like the future anyways! 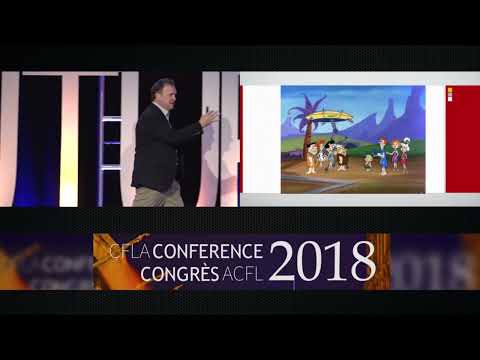 What happens when a region turns its back on the future? Florida will have difficulty attracting teachers in the future; Indiana and other regions will not become a chosen destination for new doctors and nurses starting their professional careers, and other similar trends unfold. This does not happen all at once – economic decline happens slowly and then, all at once.

With that in mind, here’s what I think will happen:

It’s pretty clear that the trend we will see in the future is that future denialism carries a price.

I spoke about this issue in this recent manufacturing podcast – and it was interesting, that this particular issue REALLY drew the attention of the two fellows interviewing me. 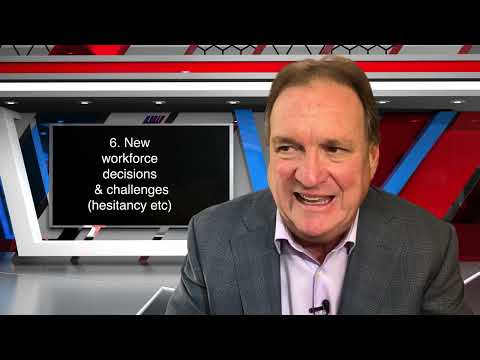