Daily Inspiration: “If all you have are excuses and an absence of any solutions, now is a good time to own up to your failure!”

“If all you have are excuses and an absence of any solutions, now is a good time to own up to your failure!” – Futurist Jim Carroll 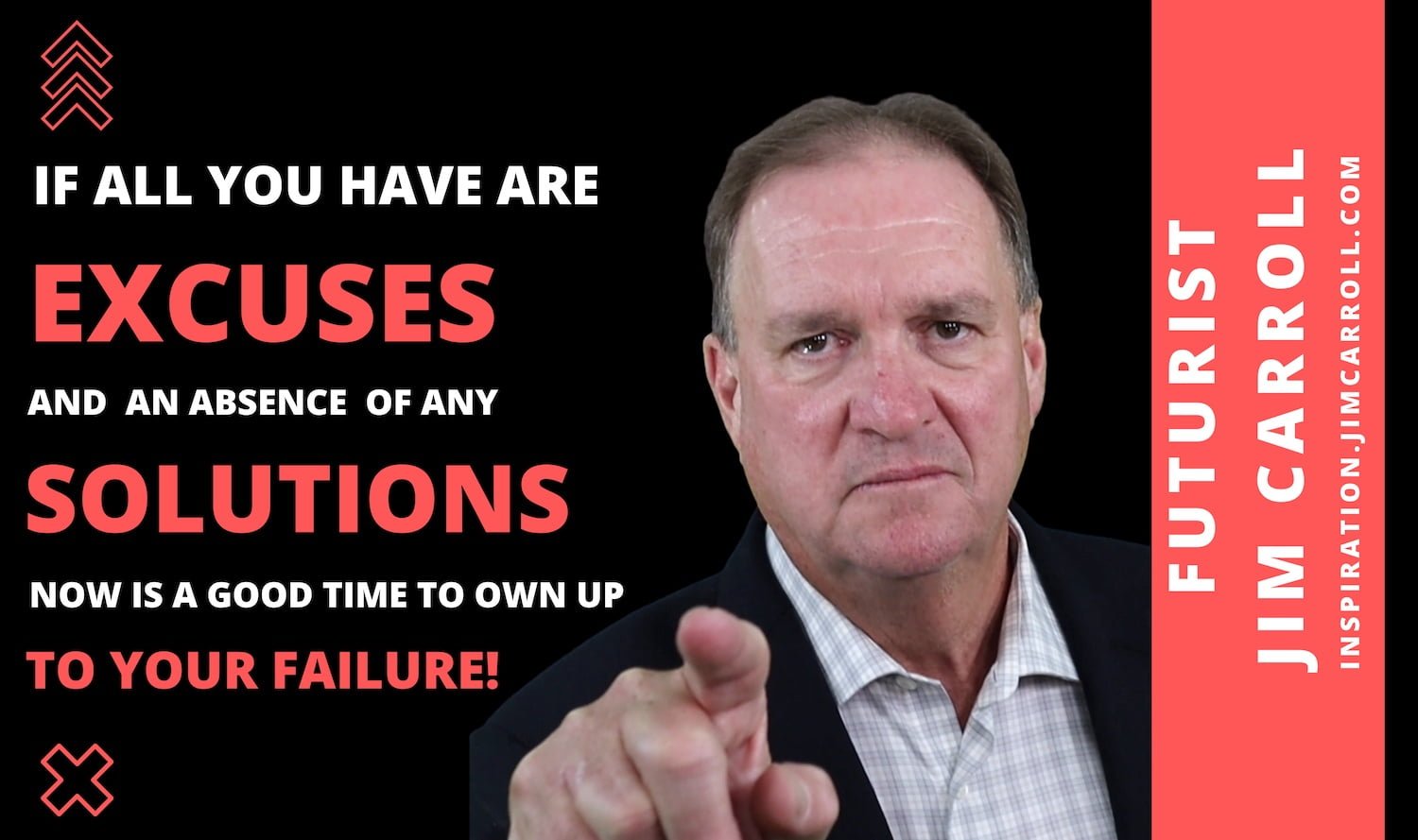 Covid has become an excuse for underlying incompetence.

Don’t you think? At some point, organizations have to stop using the pandemic as an excuse for customer service, supply chain, and all kinds of other quality failures that already existed long before the pandemic came about.

Think about it: as all of us have returned to the regular world, we’ve been hit by a constant barrage of systemic failure. We’ve been patient, and know we live in a very complicated world, and yet… much of what we are experiencing was already becoming the norm before 2020, as organizations began to regularly cut back on the quality of what they deliver.

For me and for many others who travel, this issue has most noticeable at airports. We all know that airports are not working well, airlines that are failing at their core mission, and airlines have been knee-deep in self-inflicted customer service horror stories. Newspaper headlines have been running banner headlines about the mess for months; the photos of piles of baggage reaching to the heavens hits home.

And yet, months later, problems still continue, and it makes you wonder.

Not to whine, but at London Heathrow, the other day, an obviously inexperienced or relatively new luggage screener was calling for an inspection on at least seventy-five percent of all bags. The result was an ever-growing long line of frustrated passengers bewildered at the half-hour process to have their bags inspected; the growing frustration was palpable. Curious, I asked a supervisor if there were ever any metrics to analyze whether particular screeners were overly enthusiastic in their responsibilities. She offered up a series of apologies and excuses.

Sometime later, I had to reach out to the airline to look at some travel options after some significant flight delays. No one ever answered the call, and after 30 minutes of waiting on a ‘priority’ line (LOL), I gave up in frustration. We’ve all been there. Complaining directly to a more senior airline executive later, all I seemed to get was a series of … excuses and apologies.

Even later in the day, a new-fangled customs kiosk trapped me inside its gates, refusing to let me in or let me out. A frustrated border fellow shrugged his shoulders and said, ‘technology’,  and told me to walk around the newly installed ‘smart gates.’ Smartly, I did so. Then after that, as always, at least half of the escalators at Toronto’s Pearson were out of order.

I know, I know – these are all small, first-world problems, and I’m trying not to come across like I’m whining. But the last point nailed reality for me – even before Covid, many escalators at Toronto’s airport were not working. Phones weren’t being answered. New technology implementations were failing. Inexperienced staff was doing inexperienced things.

The thing is, these types of problems are not happening just with airlines. It’s systemic across all industries, all retail categories, and all lines of service interaction. Covid has become an excuse. How many times do you deal with someone, and when something goes wrong, they shrug their shoulders and say, “supply-chain!”

Think about what you hear each and every day.

These statements artfully combine an excuse buried within an apology. And so, today’s excuse that it is because of Covid is starting to ring a bit hollow.

That’s a failure, not a strategy.

So we work to manage the broken systems that we must navigate, even though our journeys have become a never-ending series of cascading problems. Yesterday, I flew to a destination 4 hours from my final destination in order to avoid the potential nightmare that can be O’Hare airport. Better to waste my time on a highway than with the frustration of a broken airport.

And so, today’s excuse that it is because of Covid is starting to ring a bit hollow.

I have a hard time reconciling this constant bombardment of apologies with the lack of any demonstrable action with organizations – and in that way, I think Covid has become an excuse for not owning up to systemic failures which already existed before the pandemic. It’s become an excuse and helps to avoid a march towards any solutions. Consider the airline call center issue – problems existed well before Covid, where the ability to talk to an actual human being was becoming as likely as the ability to see a flight depart on time. I mean, you can hope it’s going to happen, but every single time, your hopes are crushed.

In all of this, I feel bad for the staff; they’re working hard, with limited resources and a lack of management support. They are stretched, thin in their ranks, overworked, and underpaid. Obviously, they don’t have a lot of enthusiasm for the task; they too see that management promises to ‘do better’ rink hollow when they aren’t given the resources to do what needs to be done. So, they put in the minimum viable effort.

I’m beginning to wonder how organizations will make their way out of this mess. Will they continue to ride the Covid excuse train, or will they actually begin to make some actual service commitments with measurable success metrics?

Because the excuse can only last for so long before everyone sees through it.

We’re just about there now.