Daily Inspiration: “The nearest thing to magic can  now emerge in moments!”

“The nearest thing to magic can  now emerge in moments!” – Futurist Jim Carroll 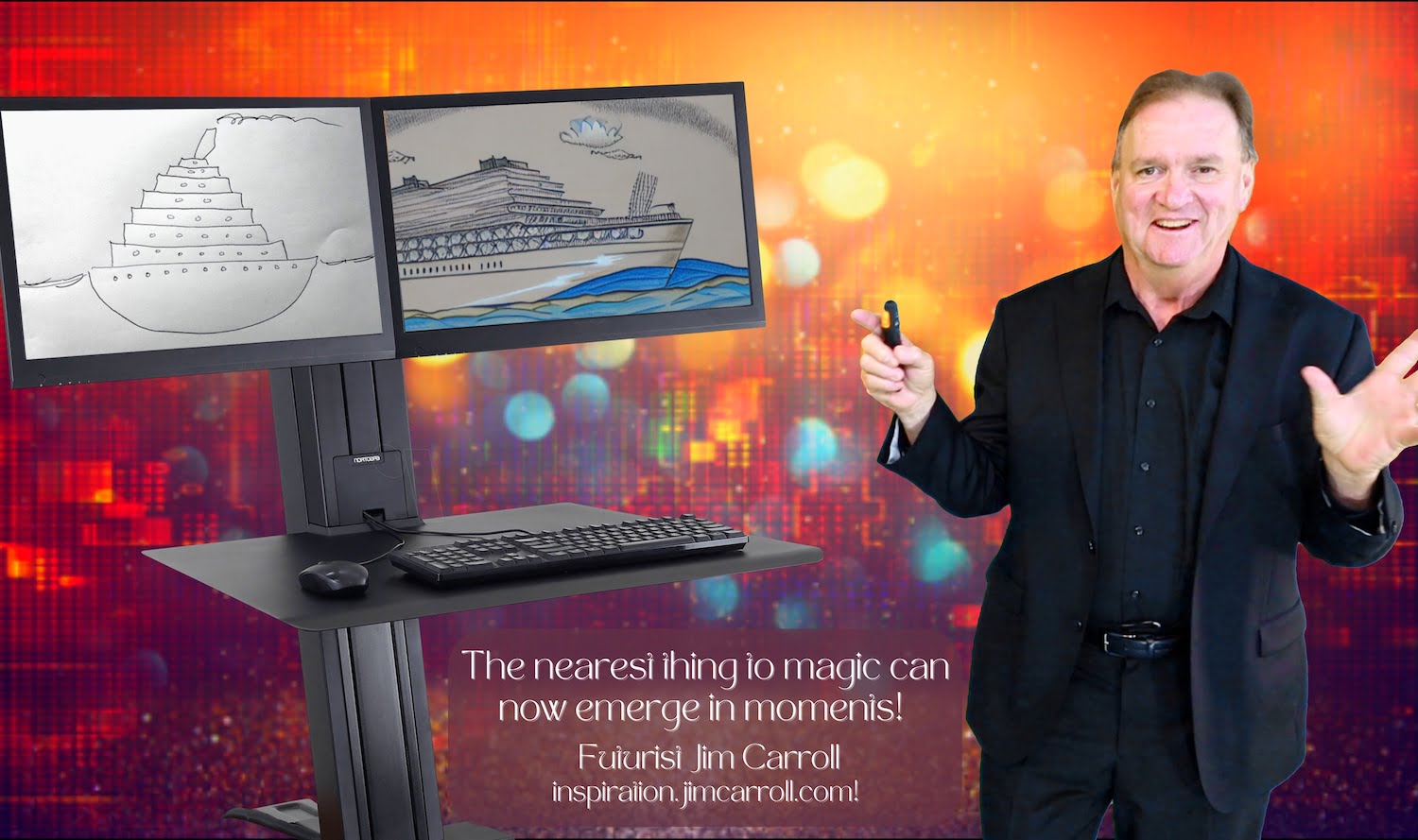 I failed art in kindergarten.

But now, because of extremely rapid advances with AI, I have the opportunity to be an artist – and this fact is indicative of the absolutely massive speed of change and acceleration of everything having to do with artificial intelligence today. To me, it’s indicative of a world in which the magic of our imagination can suddenly become reality faster than we might think!

Let me explain why this is important – this is a long post, and has to do with the fact that, as I explain on stage, in a fast-moving world, any trend that has bubbled along for years can suddenly ‘go supernova’ and become everywhere, all at once. AI – or artificial intelligence – is now that trend – and your world is going to change a lot in but a few short years.

Let’s start here. Take a look at the little ship on the left in the image above, a larger version of which is seen here: 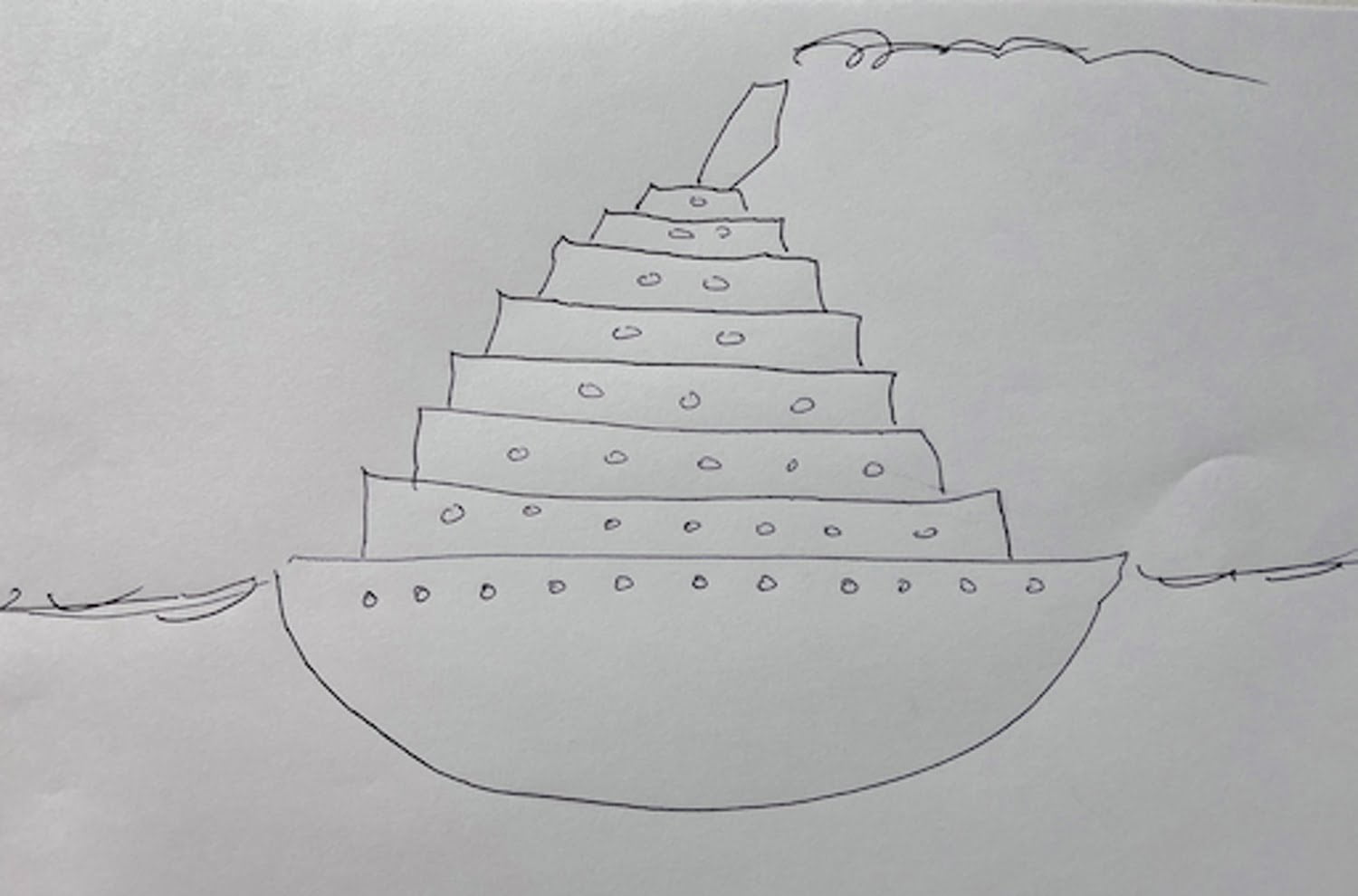 This horrid little drawing of a ship is imprinted in my memory as one of the first school drawings that I was able to do around the age of 4 or 5. I hated the visual arts – and so while other children were drawing marvelous, glorious drawings that they could take home to their parents, I never seemed to be able to draw anything. Perhaps silently rebelling, I would sketch out this little multi-level ship on the water any time I was asked to participate.

Do you want art? Here, have a ship. It became my go-to effort to get out of the stated requirements.

Fast forward to this weekend – while working to understand the latest advancements in AI – specifically, the bit having to do with “machine learning models developed by OpenAI to generate digital images from natural language descriptions” – I once again drew the ship in order to feed it into an AI image system that I set up on a virtual server in New Jersey.

Part of the art of figuring out the future is keeping on top of trends, and part of the art of figuring out trends is to geek out and actually work with those trends. So I geeked out – because, in the last few months, I’ve seen the buzz of AI-generated art go from a buzz to an overwhelming roar. You might have seen it too – friends sharing pictures from systems known as DALL-E, Imagen, Stable Diffusion, or MidJourney.

If I’m losing you, and at the risk of getting it wrong, here’s what has happened. For a long time, folks have been working with ‘text to image’ AI (artificial intelligence) systems that can take a simple text description of something, and generate something else, entirely artificial.

In other words, if you say it, it can draw it. So for example, as used on the Dall-E Wikipedia page, if you told such a system to generate “1960’s art of cow getting abducted by UFO in midwest”, you would get something that looks like this: 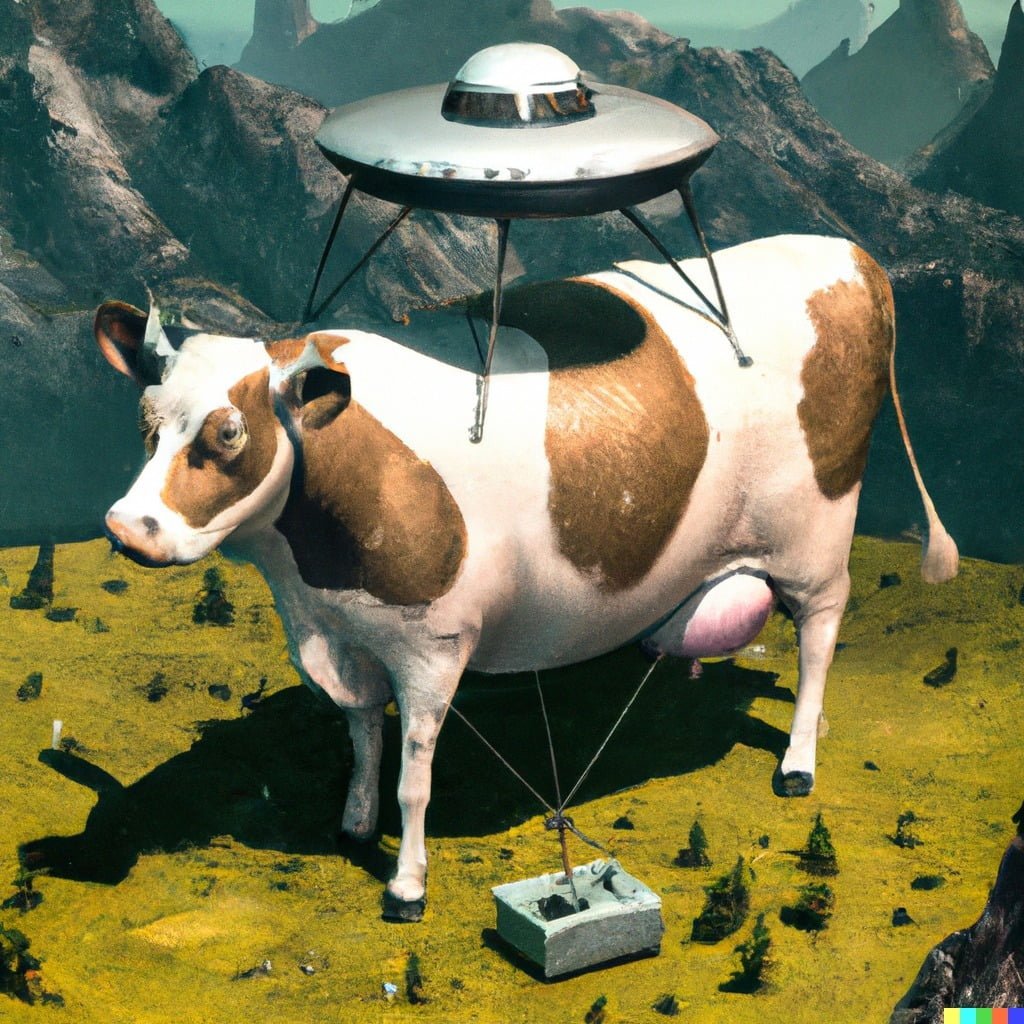 This image would have taken but seconds to generate and is based on a reference library of millions and millions of images.

Why is this important? Several reasons, much of which have to do with the fact that as art-based AI evolves, so too does all AI. And that is important – because AI will have a profound impact on all aspects of science. One example has to do with research into what is known as protein-folding, which, once mastered, leads to all kinds of opportunities with respect to healthcare, pharmaceuticals, medicine, and more. Another field is genomics – the more we can use AI to relate particular gene sequences to particular healthcare conditions, the better we can transition to a world of preventative medicine. Or in the world of construction, if we can use AI to examine and predict areas of potential structural fault, we can change how we assemble buildings and bridges.

AI is going to change our world, and the fact is, as we move faster with AI, we move faster to new discoveries, solutions, opportunities, and industries – and this whole world of ‘virtual art’ is but a subset of this rush to a new world. And suddenly, it is all happening and becoming very real, very quickly.

You might be wondering – isn’t AI going to ruin our world? Isn’t it scary? Isn’t it going to take away our jobs? I have a post about that hype and hysteria – OMG!!!! Man is DOOMED by the Machine Age! Giant Robot Brains Are Destroying Jobs!. I’d encourage you to read it.

There is no doubt that this world of virtual art is presenting all kinds of challenges – for example, having to do with plagiarism, intellectual property, and more – but as with any technology, a complex cat is out of the bag, and it won’t go back in. Consider this – t is only a matter of years before this same technology will be used to create an entirety of a feature film. If you want to explore that aspect of this strange new world, there are plenty of articles like Plagiarism by Machine.

But I digress. Back to my ship.

To explore this world, I set out to install a version of Stable Diffusion, which is an ‘open-source’ version of this concept. In essence, for the layman, this is a free, open-to-anyone computer code that can be used to do what some of the commercial offerings like Dall-E will sell you access to. To set it up, I followed this handy guide: The simplest way to get started with Stable Diffusion on Ubuntu. I created a virtual server on my favorite cloud platform, Vultr. It took me a few times to get the specs right, but I ended up setting up a Cloud GPU server in New Jersey with 10GB of memory. Following the guide, in a little while, I had my own little Stable Diffusion AI art system.

So I asked it to generate an image. My first prompt was for it to generate a “photograph of highly detailed ship with multiple levels on a horizon with clouds with smoke coming out of smokestack.” In a. matter of seconds, it drew me this: 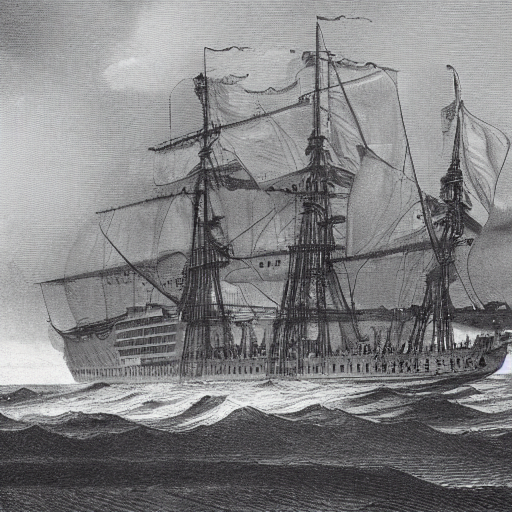 Not quite what I expected! And keep in mind that my little system didn’t simply do a search for a similar image – it drew this by referencing its dataset of millions of images, interpreting and assembling the image using the capabilities of the graphics GPU in my setup. All this was happening within about 5GB of code and took but seconds to do. To me and others, that’s staggering – and its a form of magic.

I kept going with different variations of my text request and kept getting different images. Still not quite what I expected, but interesting! I began to learn that in this new world of modern art, the specificity of the request has a lot to do with what you will get – I don’t need to be able to draw, I now need to be able to describe what I want to draw. So with that in mind, here’s a series of images my little sytem generated for me. 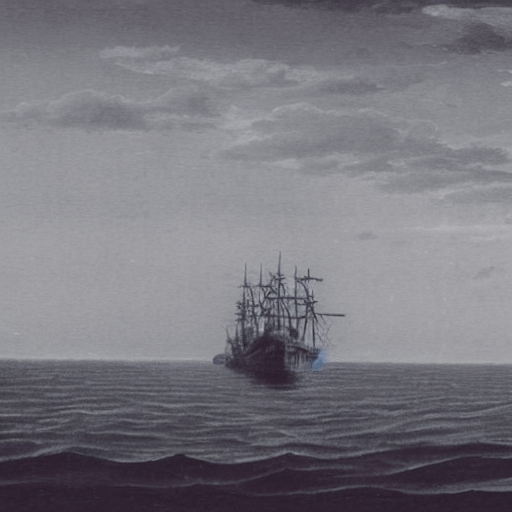 I began changing my request, with phrases like “”photograph of modern cruise ship with multiple levels on a horizon with windows with smoke coming out of smokestack” and simpler ones like “drawing of a ship with smokestack and smoke,” I was generating images at a furious pace, and os here is but a sampling of what I got back. 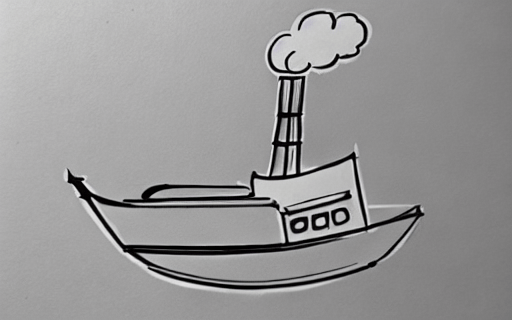 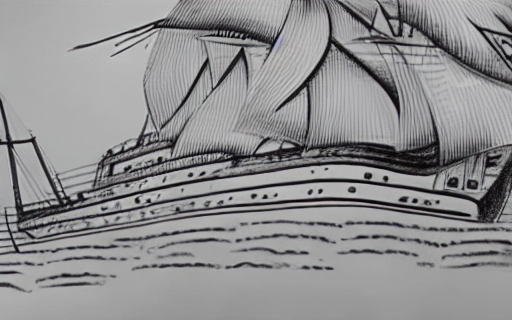 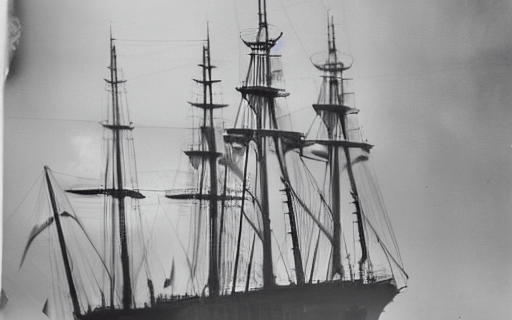 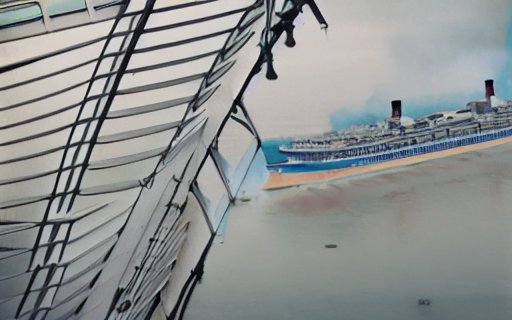 Look at that first one! That caught my attention – it was like mine!

Continuing on, reading the documentation, I also began to learn that you could offer up the system your own ‘base image’, and have it feed off of that in its process of magic. So I drew my ship, and used a command like this: “drawing of a large ship in the sea with a blue sky with mountains behind with 8 levels with smokestack and smoke  -U 4 –init_img=Ship.png”, the .png file being the magical little drawing of my ship.

And with that, I received my beautiful little ship, and became the artist I always wanted to be! 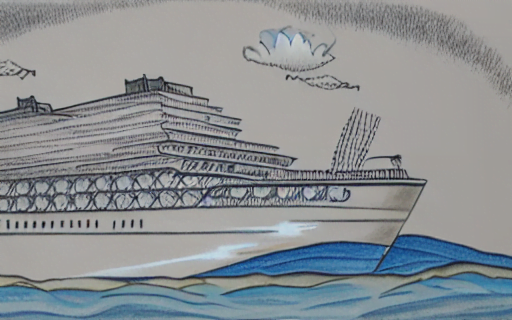 And that fact has pretty profound implications for what comes next!

That was my Saturday afternoon! What did you do?