Daily Inspiration: “At one time or another everyone thinks of a great idea that they will never pursue!”

“At one time or another everyone thinks of a great idea that they will never pursue!” – Futurist Jim Carroll 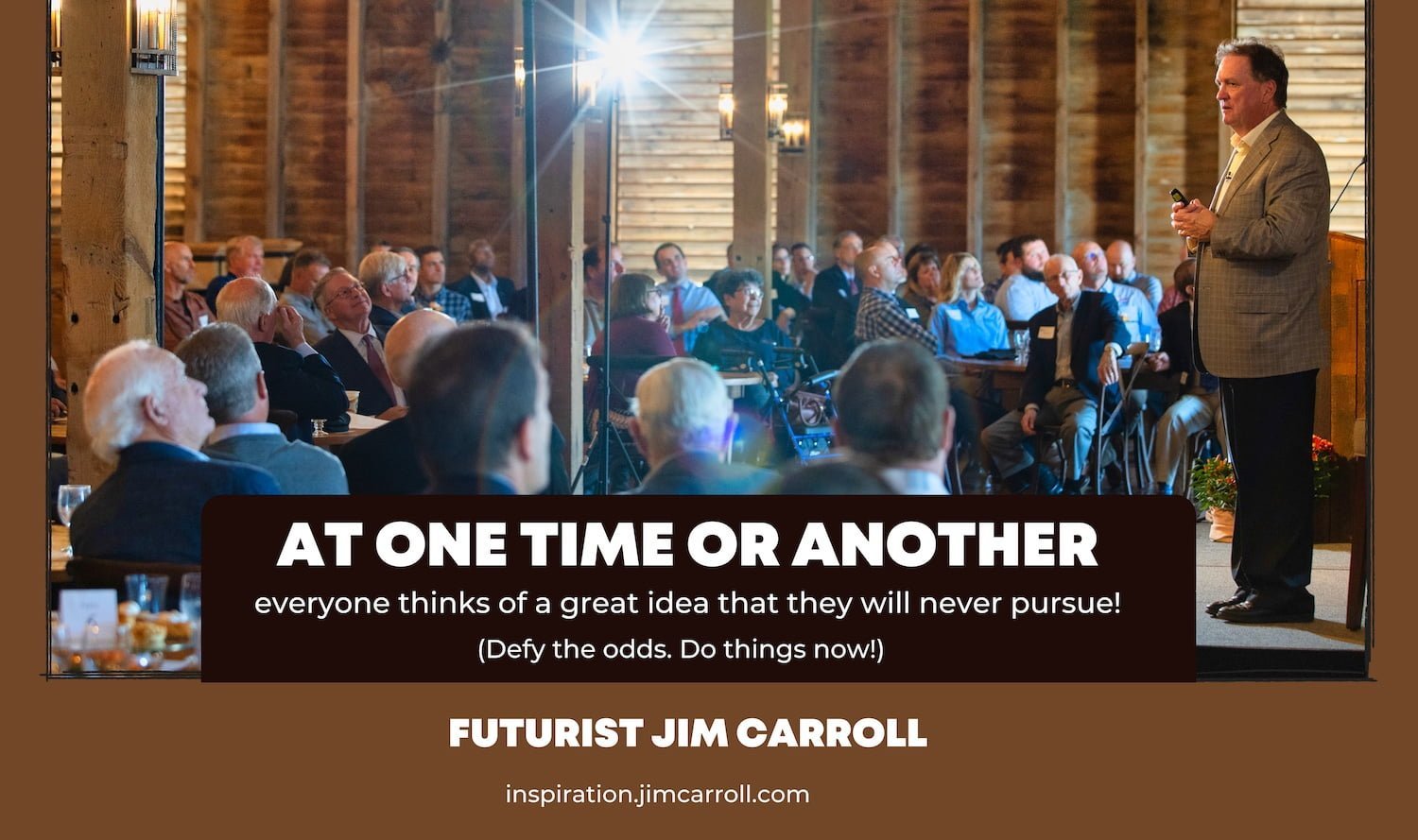 Why are great ideas so often abandoned? Why do they die? Never see the light of day?

I often blame committees and the strategic planning process – these are the usual graveyards for great initiatives and bold opportunities!

And yet, there are many other reasons. The search for the lowest common denominator is common in groupthink. A corporate culture that rewards mediocrity.  A risk-averse culture that has been battered and bruised by a previous failure without the use of that failure as a springboard for the next step. Overwhelming peer pressure in which it is often suggested that someone shouldn’t stand out from the crowd.

Then there is a complete lack of a skill set that can take an idea to completion – an organization might be an engine of creativity but lacks the runway for moving the idea into production, There might be lots of ideas to pursue but an inability to get the attention of leadership – call it ‘attention competition.’ The big problem is not a lack of ideas but the difficulty that the creative group faces in promoting those ideas in order that they can get proper attention, funding, and clearance.

Or consider conclusion bias, a mindset that can cloud the real potential purpose – the idea might apply to one form of thinking but if tweaked just a bit might lead to something totally different. Simply do a search for ‘accidental innovation’ and you’ll find that history is full of examples of R&D that was meant for one purpose but then turned into something else altogether. (Velcro!)

In some other cases, the organization doesn’t have a process by which the original thinker or ‘lone wolf’ can transition their solitary brilliance into an organizational opportunity. A culture does not exist in which individual ideas can be shared, nurtured, and pushed into the corporate idea factory. In other cases, those with the idea simply don’t know who to turn to in order to get it moving forward. Original, creative thinkers end up abandoning the organization to move into a far more fruitful innovative group.

Last but not least, there is an awful situation in which great ideas are beaten to the ground through a corporate mindset that is engineered to kill great ideas in their tracks. The idea is met with skepticism, disbelief, or hostility. The creator is told that it is a dumb idea, that it won’t work, and that it is doomed to fail. it’s too radical an idea – it doesn’t fit the ‘current mold.’ It can’t move forward, they are told, because the outcome is too uncertain and doesn’t fit the current reality.

All of these situations can lead to a sad situation in which great ideas are abandoned, tossed aside, and relegated to the trash heap of missed opportunities and futile missteps. The idea runs into a culture in which new ideas are treated as dangerous, and so hostility and resistance rule the day. Or even worse, it is assigned to an incompetent development team who then pummels the idea into failure.

How do you deal with this sad state of affairs? That’s one of the great mysteries of the innovative organization – but it really comes down to a simple thing: a leader who is willing to pursue big and bold ideas, and who creates a culture in which they are nurtured, shared, and developed. They are the ‘world-class innovators’, and if you aren’t prepared to study what they know, you won’t move forward.

Bottom line? Great ideas see the light of day because those who generate the great idea have the courage and fortitude to move forward in the face of great resistance!