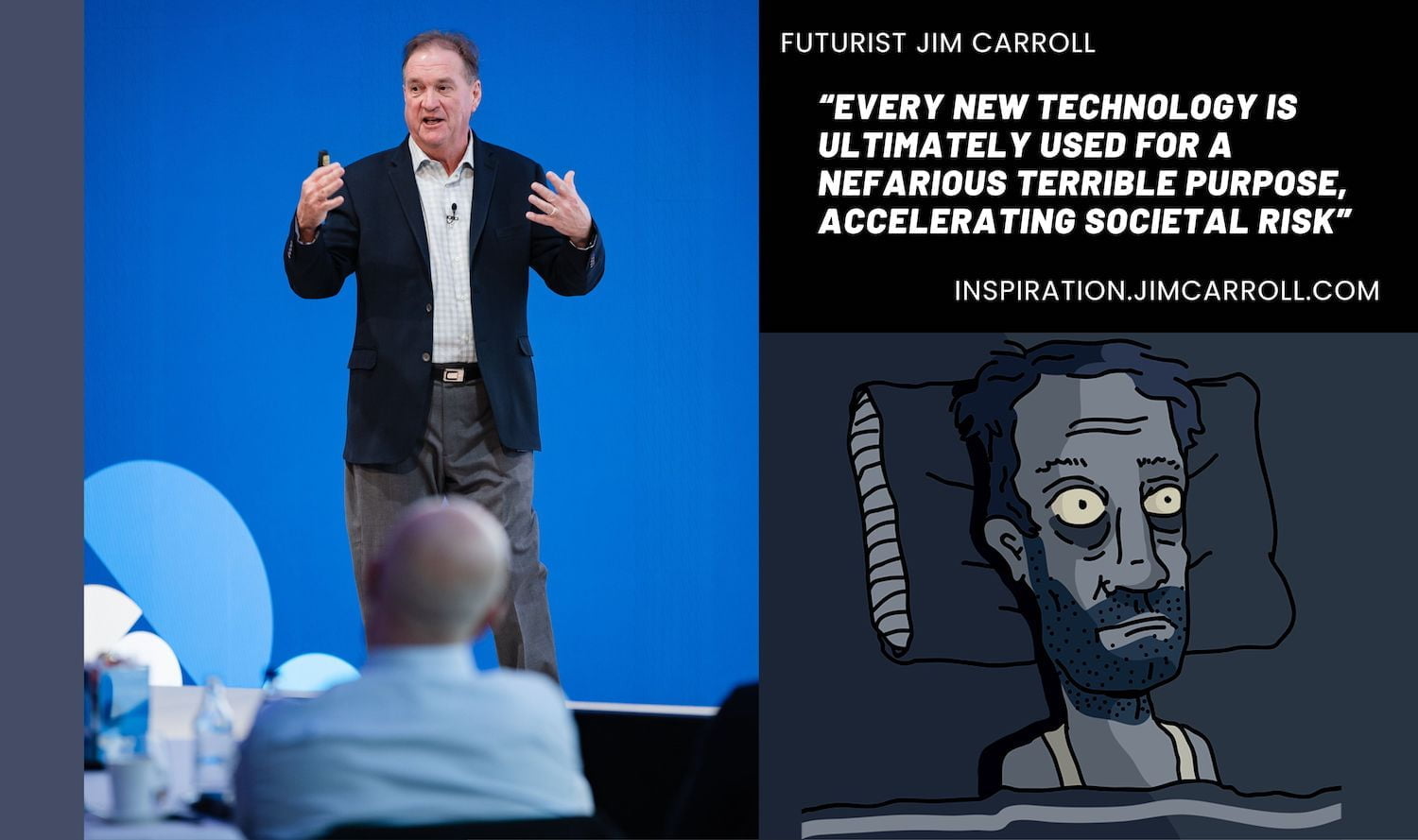 What keeps me up at night?

That was one of the questions that came to me with my recent keynote at the Zurich Global Risk Management Summit held outside Lucerne, Switzerland. My main answer is, beyond the current geopolitical situation: accelerating technology.

This comes from someone who has been a huge technology fan since first getting online and into tech in a serious way in 1982. Why now? Because of acceleration – new technology is evolving so fast that we as a society no longer understand how to manage it and minimize the new risk that it presents.

That was one of my main observations for this audience of risk managers for global organizations – folks who have to monitor, manage and clean up after sudden new risk impacts their organization and society. To manage new risk, they must be able to identify and manage that new risk – but this becomes extremely challenging as that new tech matures at a pace that has simply become staggering. Bottom line? As I observed, while technology has always been a problem in terms of providing for new risks, the big problem now is the speed with which it is coming about.

“New technologies will now always emerge faster than the ability of organizations to manage the risk it represents!” 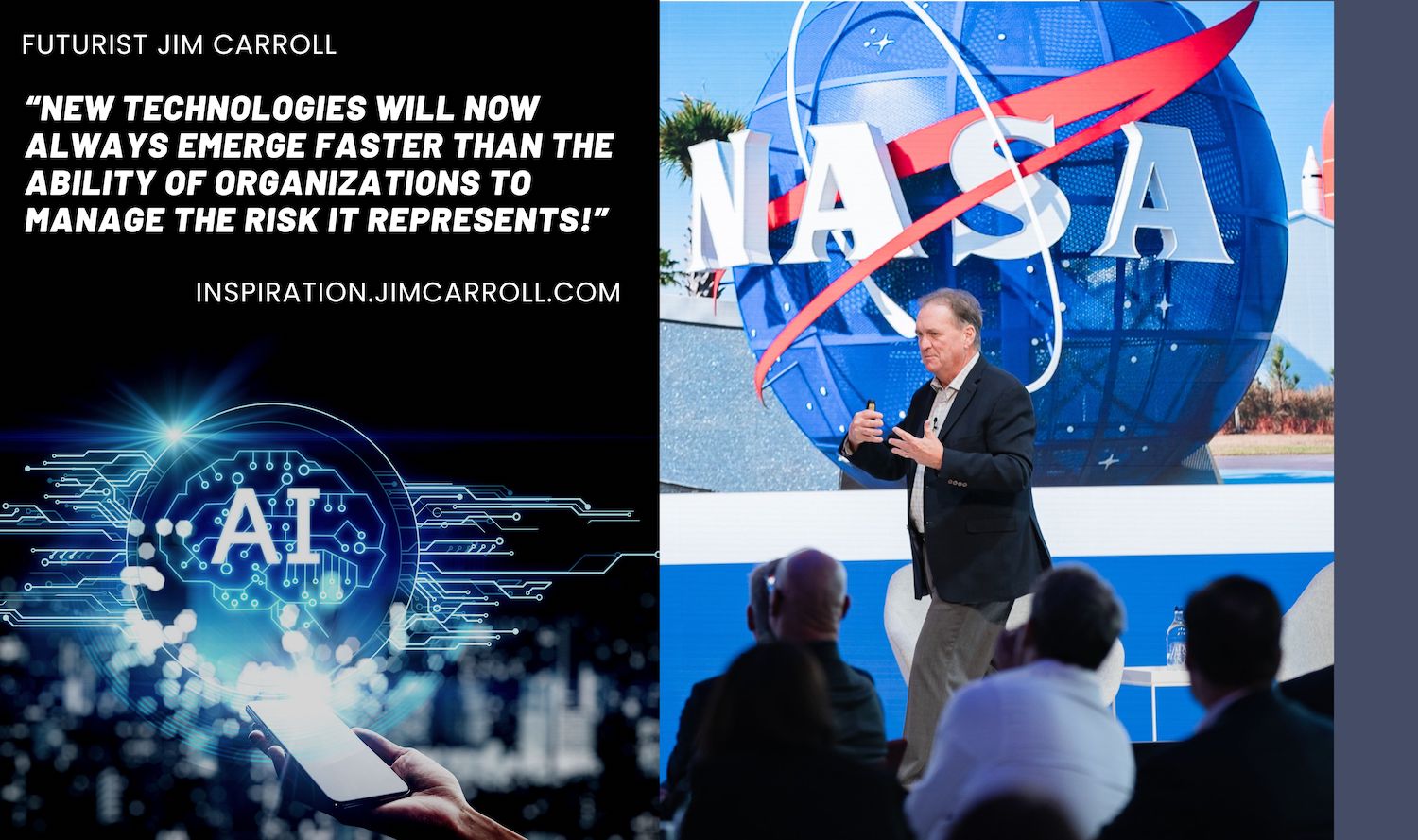 The audio of my keynote provides insight into the mindset I shared from the stage: our world is certainly quickly becoming an uncontrollable hellscape as immaturity comes to rule the agenda on many technology platforms.

I can go on Twitter and read my Twitter feed and in 20 minutes come away thoroughly depressed about the state of the world, because Twitter has been weaponized to a huge degree, and we have not gone through the thought process of how do we asa  mature society deal with this rapid generation of false news and skewed news and a reality that does not exist. I don’t think as a society, we’re really having that conversation. I think from a corporate perspective, I think what we need to do is we need to elevate our concerns…

But the example I used in Switzerland had less to do with that and more with the broader trend of the speed of new risk. Take, for example, the acceleration of artificial intelligence – AI – and how quickly text-to-image technology was maturing. Listening to the audio transcript of my keynote:

Ultimately any technology which is coming out is going to present society and present you with unparalleled risks, and the challenge is now that new technologies will always now emerge faster than your ability to manage the risk it presents.

You will have seen in the last three months an explosion of news information on what we call text-to-image generators, artificial intelligence driven text to image and text to video systems. And what this is going to do is t blur the difference between reality and fake to such a degree that we will barely be able to comprehend it. That keeps me up at night a heck of a lot, and it comes from the same acceleration of technology that is providing disruptive opportunity,

This all leads us to a world of unknown risk – the ultimate challenge for today’s risk manager:

We’re now in a situation in which companies that do not yet exist will build products not yet conceived, using materials not yet invented with methodologies not yet in existence. How do you manage risk in that world? It means you need to accelerate yourself, you need to accelerate risk analysis, you need to have better radar on the trends that are coming with the future, both in terms of their transformative opportunity, but their massively disruptive downside.

During the Q&A that followed my keynote, someone asked me if we should worry about AI, Here was my answer.

I’m more concerned about the manner by which it can be used to alter reality, and what is going on right now with these systems, DALL-E and other text-to-image generators. It’s just exploded in the last three months, it sort of bubbled along there for years and years and years, and all of a sudden it’s… so massively real. What we can do with it is staggering, but what we can do with it from a risk perspective to generate fake headlines or generate video of politicians saying something that they never said, that’s coming at us extremely quickly. So I worry less about the role of artificial intelligence – you can do magical things, so for example, diagnosis of a disease, AI can do a better diagnosis of 909 different types of eye disease than an ophthalmologist …I’m less concerned about what it provides and more concerned about how it might be used or misused, and I don’t think we as a society are ready at all to deal with that reality.

The future of risk? Pretty cloudy!  The resort that I was speaking at was located on a mountaintop, with a spectacular view out over Lake Lucerne. 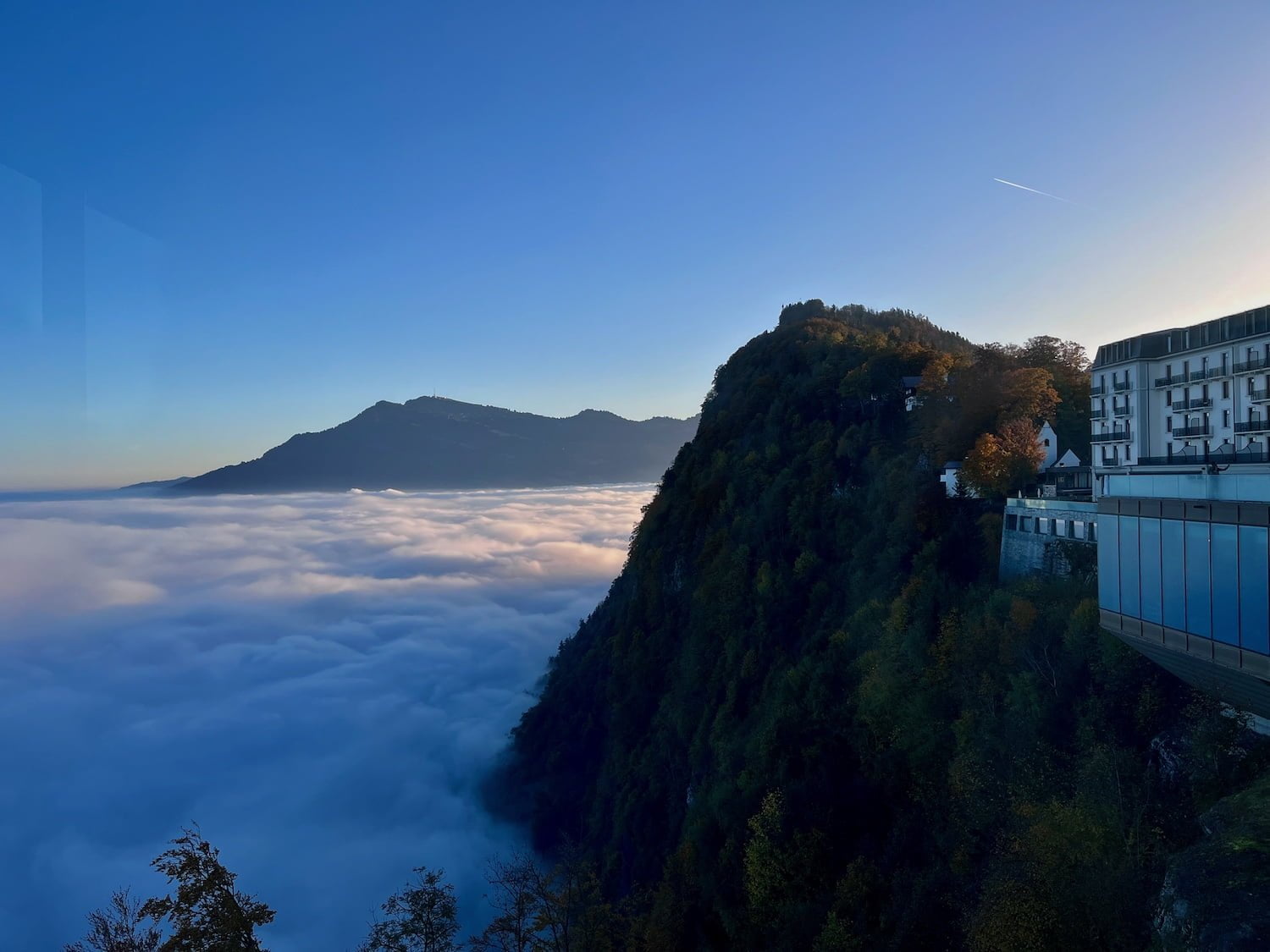 During the morning of my keynote, the lake was shrouded in fog. The stage, set against the windows overlooking what would have been a spectacular view (the large panel of windows to the right in the picture), provided me with the perfect observation to close my talk:

The future of risk is perhaps as cloudy is the fog outside the window, but some way you have to figure out a way to navigate yourself through it, a little bit over time

Before I went on stage, I went out into the fog and filmed the video version of my Daily Inspiration – I’ve been doing this every day since I joined TikTok a few weeks ago. You’ll find them on TikTok and Youtube Shorts. Note my nice hair!

This was not the first keynote in which I took on the subject of the future of risk – with a 30-year career on stage, I’ve done many highly customized talks around the topic. Here’s a clip from a keynote on the future of risk for one of the world’s largest law firms:

And indeed, the issue of the future of risk – from a legal perspective – was one of 19 Trends for 2019 that I covered in a video series:

Baker McKenzie, the 2nd largest law firm in the world, had me address the future of risk for an audience similar to that in Europe – twice, in Chicago and Dallas – and here’s the teaser video I put out in advance of the event:

So, the future of risk?